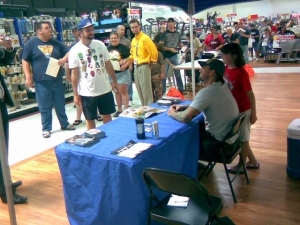 Over 500 people lined up for hours today to meet, get autographs from and photos of WWE wrestling star CM Punk inside the Rockwall Wal*mart. The event was co-sponsored by Charter Cable, which broadcasts the World Wrestling Entertainment “RAW” program. Cameras were flashing all over as people took photos of the wrestling favorite as he signed a variety of books, photos, clothing and other items. Perhaps the most unusual item was a folding chair, which a teenage boy asked him to autograph. The event was the first in a new series of twice-a-month community events which Wal*mart has pledged to hold for the benefit of the community. For more info about CM Punk and the WWE, see www.wwe.com.

A brand new Buick, Pontiac, GMC dealership opened today in Rockwall on the I-30 North feeder road next to Rockwall High School’s soccer field, and just West of Rockwall Dodge. The dealership was moved to Rockwall from Terrell by owner Robert Bobo. This is the third car dealership which has opened in recent months in Rockwall, following Randall Noe’s Rockwall Hyundai and Rockwall Toyota, both located on I-30 just East of the City. More info to come soon. For now, visit http://www.heritagebpg.com.

Rockwall Co. Sheriff thanks everyone who helped convict Sumrow

Rockwall County Sheriff Harold Eavenson has issued the following letter to everyone who helped to convict former Rockwall Co. DA Ray Sumrow, who is now in prison awaiting an appeal on his conviction. The letter reads:

While the convictions on former District Attorney Ray Sumrow are on appeal, it is not permissible for me to discuss or comment on the specifics of the case.

However, I do want to publicly thank the Collin County district attorney’s office, the Federal Bureau of Investigation, the Texas Rangers and the officers of the Rockwall County Sheriff’s Office who worked tirelessly and professionally on this case.

The Public Integrity Unit of the Travis County district attorney’s office assited us on the initial investigation and was an extremely valuable asset in the investigation.

The success to this point on the investigation is because of the dedication, expertise and professionalism ofthose who were involved.

The spirit of cooperation of those involved in this investigation was special to observe.

The citizens of Rockwall County owe a huge debt of gratitude to all these agencies and to the officers of the sheriff’s office for the outstanding job they did in developing an presenting the facts. I will be forever grateful to all of them.

“Buy one dinner, Get one free” now at Blue Canyon

Now – for a limited time only – you can “Buy one dinner, Get one free” at the chic new restaurant at The Harbor on Lake Ray Hubbard by simply visiting the easy-to-use website, clicking on the ads at the tops of many of the 50+ pages and following the simple instructions – which tell you to email your reservation date and time request via the website’s Contact page rather than phoning in the traditional way.

To take advantage of this special offer, phone reservations are not accepted; you must email your reservation request at least 24 hours in advance. The promotion is only available Sunday though Wednesday nights, including Sunday brunch and lunch. Blue Canyon is not open for weekday lunches.

The creative “Internet Age” joint-promotion is designed to increase awareness and use of both the new website and new restaurant. More publicity about it will begin to appear soon across the County.

FYI, after you send your email request, you’ll receive a confirmation email that same day or evening from the website, confirming receipt of your request. Soon after Blue Canyon will email you, confirming your requested date and time, or suggesting an alternative, if the restaurant is already booked. Phone numbers are also available on both websites to call in case there are any questions.

The General Assembly of the Presbyterian Church USA, bitterly divided over matters about sexuality and the Bible, voted yesterday 54 to 46% to drop the Church’s ban against gay clergy, opening the door to immediately begin ordaining or accepting homosexual and lesbian ministers.

The language approved was to drop the requirement that would-be ministers, deacons and elders live in “fidelity within the covenant of marriage between and a man and a woman, or chastity in singleness.”

We’ll have to do a local story soon, asking how local Rockwall Presbyterian congregations feel about this action and what they plan to do, if anything.

There’s already an Anglican congregation now meeting in Rockwall which moved here from its building in East Dallas because they objected to the Episcopal Church’s acceptance of gay ministers. Since the building was owned by the Episcopal Church, they had to either allow gay clergy or leave. They left.

The congregation currently is meeting on Sunday mornings at the Chandler’s Landing clubhouse, overlooking Lake Ray Hubbard. When I met their jovial leader, Father Don McLane, at the recent Mayor’s prayer breakfast he invited me to come over sometime and join them walking on the water! Great humor! Then again, maybe they really do…gotta’ get some photos!

An estimated crowd of over 2,000 people attending the grand opening of the City of Rockwall’s new $1.6 million Animal Adoption Center this afternoon at 1825 Airport Rd, just East of the City’s Harry Myers Park. Mayor Bill Cecil and City Councilman Glen Farris were on hand to declare the facility open for business.

About $1.3 million of the money needed for the shelter came from a November 2005 City of Rockwall bond election. Because the City of Heath City Council contributed an additional $359,000, Heath residents are also welcome to use it.

According to officials, the new facility should make it easier for the Animal Services Department to pursue an aggressive adoption policy and reduce the need to euthanize animals. The “people-friendly” adoption center was built in a much more visible location so residents could find it easier, plus the shelter offers a “Meet and Greet” room where prospective owners can go to become better acquainted with pets before adopting them. There is no limit on the length of time that dogs and cats can stay at the shelter, as long as space permits and the animals remain healthy.

Apparently, the old shelter built 23 years ago was plagued by rodents, spiders and roof leaks. Its rusty wire and sheet metal made it seem more like a prison than a shelter. And its window air conditioners, heating unit and fans were oxidized and archaic, so people and animals experienced excessive heat in summer and cold in winter. It didn’t even have a bathroom at one point.

If you want to adopt a dog or cat, or if you need to give away a pet, visit the new facility.

Now that former County DA Ray Sumrow has resigned due to his convictions for theft and because he is in jail, beginning his 15 year prison sentence which will be appealed, the campaign to elect a new DA this November may be the most hotly-contested local race in years.

Already, rumor has it, several Democrats and Republicans are laying the groundwork for Fall campaigns. Anybody knows who planning to run?

I certainly did notice the hundreds of Democrats at my voting precinct who attended their caucus meetings after they voted in the Texas primary election. The turnout was amazing!

Until that election, or unless Gov. Rick Perry decides to appoint someone else until the election, first Assistant DA Craig Stoddart holds the position after taking over in March.  Rumor has it that Craig is not interested in campaigning and is happy to continue as an assistant DA.

The Rockwall County Sheriff’s Association is warning area residents that a fundraising phone scam has been reported, and the lawmen are not raising money by phone, regardless of what anyone on a phone line tells us.

Association President Kevin Brown says he has no idea where the calls are coming from, but that several residents have received calls and reported them. Since no one agreed to donate by phone, it’s impossible to trace the calls. When those called asked for either a name or call-back number, they were disconnected.

Brown says that the Association does not raise money by phone, so be aware and don’t contribute by phone. The phone scam technique is common and has been tied to the State Troopers in the past.

To report a call or for more information, call the Criminal Investigations Division of the Rockwall County Sheriff’s Office at 972-204-7001.

The Harbor was packed with at least 3-4,000 lively concert-goers last night attending the free Django Walker “Concert By The Lake,” sponsored by the The City of Rockwall’s Parks & Recreation Dept.

I know this because I personally handed out 500 promotional fliers to the crowd (but that’s another story).

Walker and his band apparently had many fans there, judging from the applause and movement to his Texas-style rock n’ roll music. He seems to be a regular in Rockwall, having appeared here several times in the past few years.

This was one of the weekly free concerts produced for the whole family which last all Summer long. They are really quite a hit! If you enjoy music and getting out for a relaxing night by Lake Ray Hubbard, then you really can’t beat these events. They are great for people watching, too! People are dressed in a variety of outfits, from those dressed to the nines to those in swimming suits.

Everybody brings lawn chairs and blankets to sit on, plus their own food and drink, which ranges from fried chicken and sandwiches to fancy take-out from a nearby Harbor restaurant. You can see plenty of wine-sippers in the crowd, as well as soda, water and beer drinkers.

Next week Petty Theft is on the schedule to perform.

Posted in "Concerts By The Lake", Django Walker

NEW YORK (Reuters) – Television network NBC has settled a lawsuit brought by the family of a man who killed himself when the crew of TV show “To Catch a Predator” showed up at his home to film his arrest, according to court papers.

The $100 million lawsuit was brought against NBC by the family of Louis W. Conradt Jr., an assistant district attorney in Rockwall County, Texas, who shot himself as he was about to be arrested by police for attempting to solicit a minor over the Internet. more