Tom Thumb to open May 5 in north Rockwall 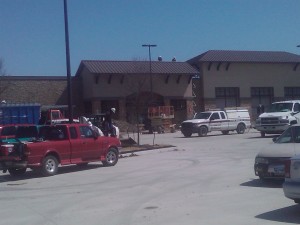 Just learned from the City of Rockwall that the new Tom Thumb store is scheduled to open May 5 in the Shoppes at Stone Creek, a brand new 15,000 square-foot strip shopping center north of Rockwall on SH 205 & SH552.

According to the City’s news release, their new “Lifestyle” format store will feature a “one-stop shopping” concept, more prepared foods and specialty items with the focus on customer service.

For more details, read the article at TheRockwallNews.com.

With proms across Rockwall County only weeks away, here’s a story that caught my attention. Could this ever happen at a school here?

An small northern Mississippi school district in Itawamba County last week canceled a high school prom after a lesbian student demanded that she be allowed to bring her girlfriend as her date.

The American Civil Liberties Union had stepped in and demanded that the Itawamba County School District allow Constance McMillen, 18, to attend with her date.

A school board statement Wednesday announced the district wouldn’t host the prom on April 2 at Itawamba County Agricultural High School.

McMillen wanted to escort her girlfriend who is also a student. She was also denied permission to wear a tuxedo.

A school district policy requires that dates be of the opposite sex.

The district’s statement never mentioned McMillen’s request, but officials said the change was made because of recent distractions.

District officials say they hope private citizens will host a prom, as one hotel owner has offered to do.

Any comments? Are there any gay couples in Rockwall County high schools?

Vice President Joe Biden stuck his foot in his mouth again at the historic signing of President Obama’s health care plan signing yesterday, dropping an F-Bomb on-air without realizing it could be heard through the microphone just before Obama spoke to celebrate the passing of the bill.

Biden’s profane whisper is the latest in a string of gaffes that have made his foot and mouth a legendary pairing.  Here is yesterday’s:

Half-Price Books will begin buying books, music, movies and games for cash  at its new Rockwall store this Monday through Saturday from 9 am-5 pm, and will start selling books and be open for business on a regular basis beginning March 22.

The new store will open where Circuit City previously was located, in the Rockwall Crossing Shopping Center south of I-30, between the freeway and Ralph Hall Parkway, at 959 E. I-30, suite 101, 75087.

According to their website, the first 100 people through the door daily during their Great Opening celebration from Monday, March 22 through Sunday, March 28 will receive a free tote bag and $5 Half Price Books gift card (limit one per person, 16 years of age and up).

Each day, one lucky shopper will win a $100 gift card!

Owner, developer of The Harbor files for Chapter 11 reorganization

has filed for reorganization under Chapter 11 of the federal bankruptcy code.

According to a City of Rockwall news release issued late Tuesday afternoon, the City has been notified that Mariah Bay Leasing Corporation, owned by Rockwall-area residents Rob and Sarah Whittle, filed for reorganization so the company could address their financing issues and “come out of this in a stronger and better position.”

Rob Whittle says that business is actually “off  the charts” and never been better at the restaurants, movie theater and hotel, but that he’s trying to get the debt reorganized and interest rates reduced “so retailers can get the rent concessions we need to give them.”

Twelve businesses have gone out of business since The Harbor opened in November, 2006. Seventeen businesses are currently open there.

For more details about the reorganization, read the more complete story at TheRockwallNews.com.

If you missed registering to vote or voting in the Republican Primary election last Tuesday, you can still do both for the April 13 vote. Just visit the Rockwall County Elections Office website.

There were four outright winners last Tuesday in the GOP Primary Election:

Incumbent County Commissioners Lorie Grinnan and David Magness, plus political newcomers Shelli Miller as County Clerk and County Chairman Paul Wilson. Since no Democrats announced they will run for local offices, the Commissioners and Miller will all take office next January. Wilson will take office at the County GOP convention this June.

Either retired corporate exec and military officer Jerry Hogan or veteran banker Kevin Fowler will displace current County Judge Chris Florance, who now becomes a lame duck through the end of the year.

Just learned yesterday that our Rockwall City Council voted 5-1 last week to spend $152,000 for decorative lights on the almost-completed Highway 205.

Can you believe that? I can’t.

At a time when the whole nation is concerned about unnecessary government spending, why would our Council members vote for something like this? Please enlighten me, somebody!

Cliff Sevier was the only Council member to oppose the idea. Hooray for Cliff!

I’ll be investigating the story this week to get the facts but I suspect I’ll be writing the full story and an editorial opinion against the lights this week for TheRockwallNews.com.

Anybody watch the Mavs beat Sacramento last night? Despite having to play without the injured Jason Terry -who’s out for about two weeks after surgery to repair facial injuries, Brandon Haywood – who hurt his back in the first quarter – and even Coach Rick Carlisle – who was ejected – the Mavs revved it up and took a 13-point lead during the third quarter and then held on to win, 108-100.

Dirk hit all of his fourth-quarter free throws again and has now hit 17 straight free throws in the fourth quarter of the last two close games.

It was funny to watch Coach Rick get tossed in the second quarter. He rushed out on the court, screaming his normally composed head off at a ref when the refs refused to call fouls on the Kings for hacking Dirk on three consecutive drives to the basket. Did Carlisle do so to spark the Mavs? Apparently, because behind by about eight points at that point, the Mavs charged to just one point behind at the half.

Now what do you think of rookie Roddy Beaubois? I think he’ll soon become a fan favorite. I love watching him play because he has such high energy. Stepping up last night in Jet’s absense, Roddy hit 3 or 6 trays and scored 22 points – his all-time high. The guy is lightning fast – even faster than Devin Harris – plus he drives to the bucket without fear.

With the Lakers’ loss to Charlotte last night, the Mavs are only four games behind Kobe & Company and .5 game ahead of Denver. Can the Mavs overtake the Lakers and earn the first seed in the playoffs? If they keep playing like this – and I dont’ see why they won’t – I think there’s a great chance.

Since the All-Star break and trade for Haywood, Caron Butler and DeShawn Stevenson, the Mavs are 10-1! They’ve hardly even had a chance to practice with two new starters and only lost their first game together? Amazing. Obviously Cuban and Donnie must be congratulated for a fab trade. The chemistry must be right, too, of they wouldn’t be winning.

Go Mavs! Next victory is tonight in Chicago against Da Bulls (31-30) beginning at 8 pm on Fox Southwest. I’ll be watching.